Winning the Battle over Opioids: From Tragedy to Wellness 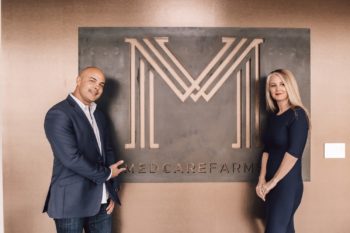 CANNABIS CULTURE – “I lost that enthusiasm for life, that passion.. I don’t know where either of us would be if I was still on this path.”Garin and Kelly were successful real estate agents in Washington.  They fell in love, married, and started their own company, working passionately 6-7 days a week to reach their dreams, and becoming the top 1-2% realtors in the area.  They regularly exercised, ate healthy, and were active in their community.  Life was good and they were proud of their successes.  Then one day in 2008, as Garin was out riding his motorcycle on the highway with Kelly not far behind, a truck failed to yield at a left turn, causing Garin to hit the truck directly at 45 miles per hour.  In that moment, Garin knew that there was nothing he could do to change that outcome, a traumatic realization that continues to haunt him to this day.

When Kelly arrived at the scene of the accident, she saw how serious the accident was.  Garin had suffered severe injuries including short-term memory loss and almost losing one of his arms.  This was 1 of 3 severe accidents that he had survived, and it was obvious his recovery was going to be extensive.  The admitting doctors were quick to prescribe Oxycontin and Ambien for pain.  At the time, not nearly as much was known about the dangers of opioid addiction as is now, and he was told that there would be no issues while taking these medications.  However, as Garin began to slowly heal, both he and his wife noticed the significant impact that the use of these pharmaceuticals was having on his mental and emotional wellbeing.  Despite this, his medical team seemed to have less of a focus on his physiotherapy and mental health, and were just focused on controlling his chronic pain.  There was no emphasis on the ramifications or potential side effects.  The solution for all his problems, according to doctors, was just taking another pill.  They were effectively using pharmaceuticals as a Band-Aid with no followup.  As Garin says, “There was never really any conversation on that aspect (addiction).”  Even something as simple as followup therapy was left for them to source out alone.  Kelly knew that she was watching her husband slip away.  The prescribed opioids were transforming him into a shell of his former self.  He no longer found passion in anything that he previously enjoyed, and she felt that the things he used to find endearing about her were now the things that aggravated him.  He was a changed man, and she had to get her best friend and husband back.

At the same time that Garin was going through this, his best friend was also suffering from an opioid addiction.  Though a prominent bank manager, in a shocking turn of events, his friend turned to robbing banks to support his habit.  His behaviour escalated until he ended up in jail for shooting another person in the head.  He is still incarcerated to this day.  In addition to this, Kelly’s mother also was battling cancer, and sadly, ultimately lost her fight.  During this time, her mother too was on opioids, and Kelly saw her mother’s personality change and her cognitive function and awareness decline.  These clearly dramatic experiences, in conjunction with support and encouragement from Kelly, really opened Garin’s eyes to the danger that he was potentially facing.

According to the CDC, nearly 450,000 people died from both prescription and illegal opioid overdose between 1999-2018.  While the number of deaths has since decreased in the past 2 years, deaths from synthetic opioids, such as fentanyl, have been on a steep rise.  It is also estimated that the burden economically in the United States from prescription opioid abuse costs $78.5 billion a year, which takes into account things such as criminal justice involvement and healthcare.  Obviously opioid addiction has serious ramifications, and both Garin and Kelly knew something had to change. 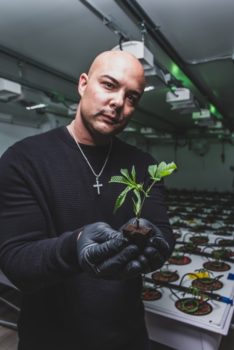 Luckily, Kelly was already an advocate for the use of cannabis as an alternative to traditional medicine.  Although at the time it was not legal, they were able to access marijuana on the black market, and Kelly was already partaking to help with PTSD and other emotional damage as a veteran of the United States Army.  About 6 months into his recovery, and with his wife’s loving encouragement, Garin started to use marijuana for the purpose of regaining control of his pain without the use of Oxycontin and Ambien, and they both began to see a dramatic improvement.   Cannabis slowly allowed Garin to get back to eating right, sleeping, working out, and overall gave him a better outlook and energy level.  He was no longer feeling drugged out from pills, but rather was returning to a more normal routine and becoming closer to his wife again.

Of course, not everyone was understanding.  Even after legalization, many friends and associates had a hard time finding medical cannabis use to be socially acceptable, while pharmaceuticals were widely approved and much more conventional.  Many were quick to pass judgement and label them as “bad people,” without understanding the reason behind the use and understanding how prevalent and dangerous opioid addiction truly was.  Despite this, Garin and Kelly continued to remain solution driven, and decided that there had to be a way to make safe medical cannabis more accessible to those who needed it most.  It was crucial to them that the use of marijuana became seen as a beneficial tool that could change lives for the better and even aid in the transition off of potentially life-altering opioids.  Their mission became awareness.   It was from this strength and determination that the idea of MedCare Farms was born. 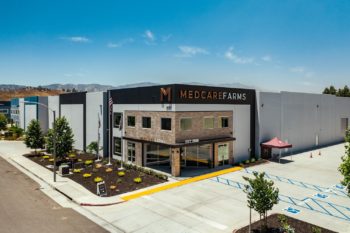 In 2009, Kelly and Garin moved to California and directed their finances and energies into starting MedCare Farms, a craft cannabis company.  They made many sacrifices along the way, but knew that their experience had the ability to significantly improve the lives of others.  As stated on their website, “As a mission-driven company, one of our main objectives is to set the standards of excellence in the market.  We are building a business in which high standards are infused in all aspects of our company.. Most importantly, we will continuously strive to educate the community on the benefits and simultaneously prove that those who use cannabis can be productive and successful members of society.. We will continue to aspire towards expanding our reach to ensure no one is left without the option for cannabis as an alternative to opioids.”

One of the things that they noticed in their journey opening MedCare Farms was that other grow operations would often take what they called “the lazy way out,” using chemicals and shortcuts to make their cultivating easier.  Garin had a background in cultivation and knew that often chemicals once thought safe would prove to actually be quite harmful in future studies.  They also knew that the unregulated market would not always provide a reliable and pesticide-free product as there was often no way to see how the plants being ingested or inhaled were grown.  Despite cannabis being safe, there was the awareness that the processes in growing and cultivating with synthetic ingredients could make these same plants unsafe for medically fragile people, such as cancer patients.  Kelly and Garin knew that if they were going to do this, they wanted to do it right.  Although not realizing how challenging this kind of growing would be at the time, they did not give up easily.  Despite multiple crop failures in the early stages, they were determined to continue on utilizing the safest and cleanest methods possible and keep learning. 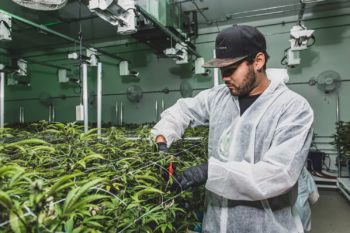 Now with more than 12,000 regular customers, Kelly and Garin have taken pride in seeing that the care and attention they put in to growing and cultivating “connoisseur-grade cannabis” is paying off.  Their customers are not just your average cannabis users.  In the quest for social acceptability, they envisioned putting a new face on cannabis use, and now are thrilled to see multiple generations of families coming in together to purchase their high-quality strains, which are grown in quality environments without pesticides and are cared for by hand with a special blend of oxygen-rich nutrients.  They consider their company to be unique in that it is not a focused market, but rather for everyone.  The experience of having customers leave happier than when they came in is one that has brought them great joy.  They have learned that successes are built on failures, and that money will be the hardest thing to gain, but nothing will supersede the need for passion if they wanted to be successful, and that only with this dedication would they get the results they wanted.  If Garin and Kelly have nothing else, they indeed have a passion to improve the lives of others through safe cannabis use and bring awareness to the world around them.

Today Garin’s focus is on improvement, not just for others but for himself as well.  He and Kelly present as a wonderfully strong and cohesive team who remain concentrated on clean living and healthy behaviours.  In conjunction with daily cannabis use, they find that working out, eating well, and keeping a natural approach to life has benefitted them greatly.  They know that there are so many people out there still who are in pain and suffering, and who either do not do anything to try and improve their lives or simply do not know what can be done to change the patterns of pain and addiction that they face.

When asked what they would tell those who are currently struggling with issues, including those of opioid addiction, their focus remains on safety, being healthy in all aspects of life, and staying in motion.  They expressed that they wanted people to know you can safely use marijuana as an alternative to harsh pharmaceuticals and still be a good citizen and manage your life while setting a good example for others.  Most importantly, cannabis can provide the ability to manage in the most minimally invasive way.  Garin and Kelly faced a terrible situation that they would not wish on anyone, but instead of letting it destroy them, they stood together and used their resources and skills to focus on recovery and helping others.  They are incredible advocates for safe and accessible cannabis use, and work hard every day to make sure their fellow cannabis users have the opportunity to access the fruits of their labours.  They are truly a story of inspiration and strength. 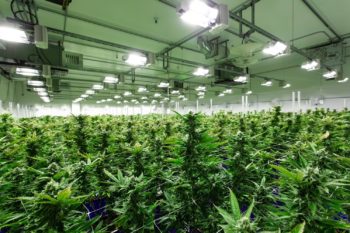