Hash Running Bears, The Struggles & Triumphs of Joseph Pietri as Written by his Son 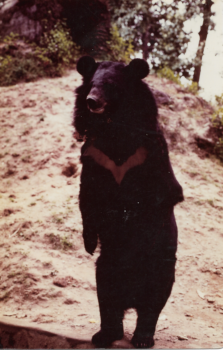 CANNABIS CULTURE – Joe’s hash running business had successes and failures with dogs, if you can call a hundred pound Tibetan Mastiff a dog and not a bear, but it all ended with the bears and a worker’s rookie move.

Joseph Pietri, author of The King Of Nepal, The King of Nepal: Ice Wars Edition, and The 15-Ounce Pound, Big Pharma’s Plan to Patent Pot, recants the wilder years before the War on Drugs. For those unfamiliar with ‘hashish’, it is a highly concentrated form of cannabis with a history of use which goes back thousands of years in Nepal, the Western Himalayas and Central Asia.

As it did with so many cannabis aficionados of those golden years, it started for Joe with good bud, over fifty years ago. My father describes his first experience quite simply, “It was so strong, I couldn’t see!” It was love at first blind, and this affinity became an entrepreneurial endeavour when Joe realized he could sell it to his friends, and smoke for free. Grams became ounces, ounces became pounds, and Joe transitioned from selling bud, to importing hash.

Tibetan Mastiffs are an extremely rare and expensive breed with a long history in Central Asia as village guardian dogs to protect herds of yaks, and they were highly sought after. Many of the Tibetan Mastiffs in the U.S today have some of their genealogical roots to the dogs brought over in the 60s and 70s. The Tibetan dogs, except for their aggression, were perfect for smuggling because they fooled the drug-sniffing canines used by customs. Those dogs were so excited to see the bear-sized mountain dog, that they all missed the hash. It was only if a crate was drilled that customs could detect the false bottoms AND false tops and the contents therein.

One deal involved 40 kilos, 20 per dog in each crate, one especially ferocious Tibetan Mastiff (“he had no name, except crazy dog”), and Joe’s mastiff Kali. The first hiccup involved a worker of Joe. Whereas Joe told customs he was legally exporting exotic dogs and omitted the hash, the other guy said, “I’ll give you each 50,000 Nepalese rupees if you let the animals by”. If you thought that they’d be upset by this proposition, you would be wrong, their response was, “You mean they’ve been sending these dogs and smuggling all this hash for years and he didn’t pay us?!”.

The first crate with the crazy mastiff got stopped in Heathrow, London on its way to Philadelphia. Before the flight, a meatball with a Quaalude was given to the crazy mastiff, “it knocked his ass out”. Unbeknownst to Joe, he missed the first flight and didn’t leave until the next day. The dog woke up pissed off in the cargo hold of the plane, at that time Joe was “making the bottoms and the tops heavier, and the sides lighter – for extra hash”. The 100-pound dog chewed through his wooden crate, was loose in the cargo hold, and everyone was afraid to go in and unpack the luggage. They had to call the RSPCA who came and tranquilized him before putting him in another crate, and sent him to Philadelphia. They ended up burning the crate the dog came in, and smelled Joe’s temple balls (what hashish is referred to as in Nepal). That gave up the ploy of course, and they figured out the ruse with the other mastiff Kali in Boston, “I cried like a baby”, says Joe, on the loss of his dog Kali. The crates and creatures business out of India ended on the spot, and the only two that ever got arrested were the two mastiffs.

After that fiasco was busted, Joe went back to Nepal, and switched the game plan to a mutually-beneficial zoological exchanges. Joseph was in his early 20s at the time, and ambitious; he called himself the hash king. Bigger crates, with bigger animals, meant bigger loads of hash brought across the Atlantic. Tibetan ponies, a smaller breed of horse which ranged from pleasant to quite persnickety, were also utilized. Joe rode the one he liked up to his mountain base, and they sent the cranky one across the sea. Joe reminisces, “He was a nasty motherfucker, he bit everybody.” Jenakio Lenin begins her recanting of that bygone era in the The Hindu, “My Husband and Other Animals — The Drug Runner (Part I).” A Nepalese carpenter named Myla built wooden animal crates with his sons, and Joe and his team stuffed the crates with hash and added false tops and bottoms. Myla and his sons built the cages and the frame, but never knew about the hash.

The Cincinnati Zoological Society (now known simply as the Cincinnati Zoo & Botanical Garden), was especially eager to acquire four red lesser pandas, which we believe were the first four that entered the country back in 1971 or 1972. In exchange for their red lesser pandas, a Nepalese zoo in Jawalakhel (at the time part of Katmandu) would receive their first ever chimpanzees, Kancha and Kanchi. This older pair was purchased from the Ringling Bros. and Barnum & Bailey Circus for $5,000, over $30,000 today after adjusting for inflation. The Cincinnati Zoo was so ecstatic to get the red pandas, they paid for the entire operation, completely oblivious to the extra content of the carefully-packed crates. As to why the circus was okay with selling their chimps; they get more and more unruly as they get older. At a certain point, they’re not viable in shows, because they are too aggressive. The smoking apes (chimpanzees are not monkeys!) were especially well-received in Nepal, where they begged for cigarettes when they saw people smoking. One cigarette each and Kancha and Kanchi performed their entire circus routine, they were celebrities, in no doubt the humor appealed to that hashish smoking culture. The zoo saw more visitors than ever. before As for the hash, Joe explains that it was one if not the only loads of actually-opiated hash was ever brought over to America. It was an older and drier batch, so 10 kilos of opium were mixed with 40 kilos of hash, and it sold “very quickly”. The other “white hash” you got in the U.S was white…because of mold.

An associate of Joe’s, Nat, got busted when he tried sending a sloth bear, which Joe quite passionately explains “are NOT the same thing as Himalayan black bears, they’re two different animals!” Joe had two bears ready to ship, but he was waiting for a fresh batch of hash to send across the Atlantic. Joe found out about Nat getting busted right before he was going to send the bears; Joe was hesitant, but his friend convinced him to ship anyways. The shipment went through New York, where customs drilled the boxes, where they were delivered to an animal farm in Northern California. There was one cop car watching the bears, and Joe’s team was watching the police and the farm. My father was quite insistent in his instructions to his team members, “do not use the CB radio, they’ll locate us.” But idiots don’t listen, and the feds used the radio to triangulate their position. The only saving grace was that they had the two bears in two trucks, and there was only one cop car. They split up, one truck got busted, and the other car made it through and they released the bear (obviously not an endemic species, but this was the wild 70s) into the mountains. Even with half the load of hash, it was still a ton of money, but the scam was over. As for some of Joes’ other adventures; those are stories for another time. These days, Joseph Pietri the (hash) “King of Nepal”, who ran his operations with the blessing of his majesty’s government of Nepal, has his humble abode in Oregon, where he has a medical license and sells landrace seeds.